Invasive species are plants, animals, and micro-organisms introduced by human action outside their natural past or present distribution whose introduction or spread threatens the environment, the economy, or society, including human health (Government of Canada, 2004).

One of Ontario’s most aggressive invaders, Garlic Mustard is easily identified by a strong garlic odor emitted from young leaves when crushed.  During its first two years of establishment, it has two distinct life stages.  In its first year, dark green, kidney-shaped leaves with scalloped edges grow in low-lying basal rosettes.  In its second year of growth the plant sends up a long stem, 0.3 to 1.2 metres tall, with triangular, sharply toothed leaves alternating along the stem.  Second year plants produce small white flowers with four petals that turn into long seed pods (siliques) 3-6 centimetres long mid-summer.  The low-lying, kidney-shaped leaves from its first year of growth are still present.

Initially introduced from Europe as an ornamental shrub, this plant now takes over riparian areas, ditches and fence lines.  Japanese Knotweed grows in large bamboo-like clumps, reaching heights of 1 to 3 metres.  Its stem is light green and reddish-purple, hollow, and smooth.  At each node, where a leaf branches out off the main stem, there is a red-brown ring around the stem.  New stems emerging in the spring resemble asparagus and are more purple than green in colour.  Leaves zig-zag along the stem and are triangular, with a pointed tip and flat base.  Flowers are small white sprays between the leaves, with winged fruit appearing in September. 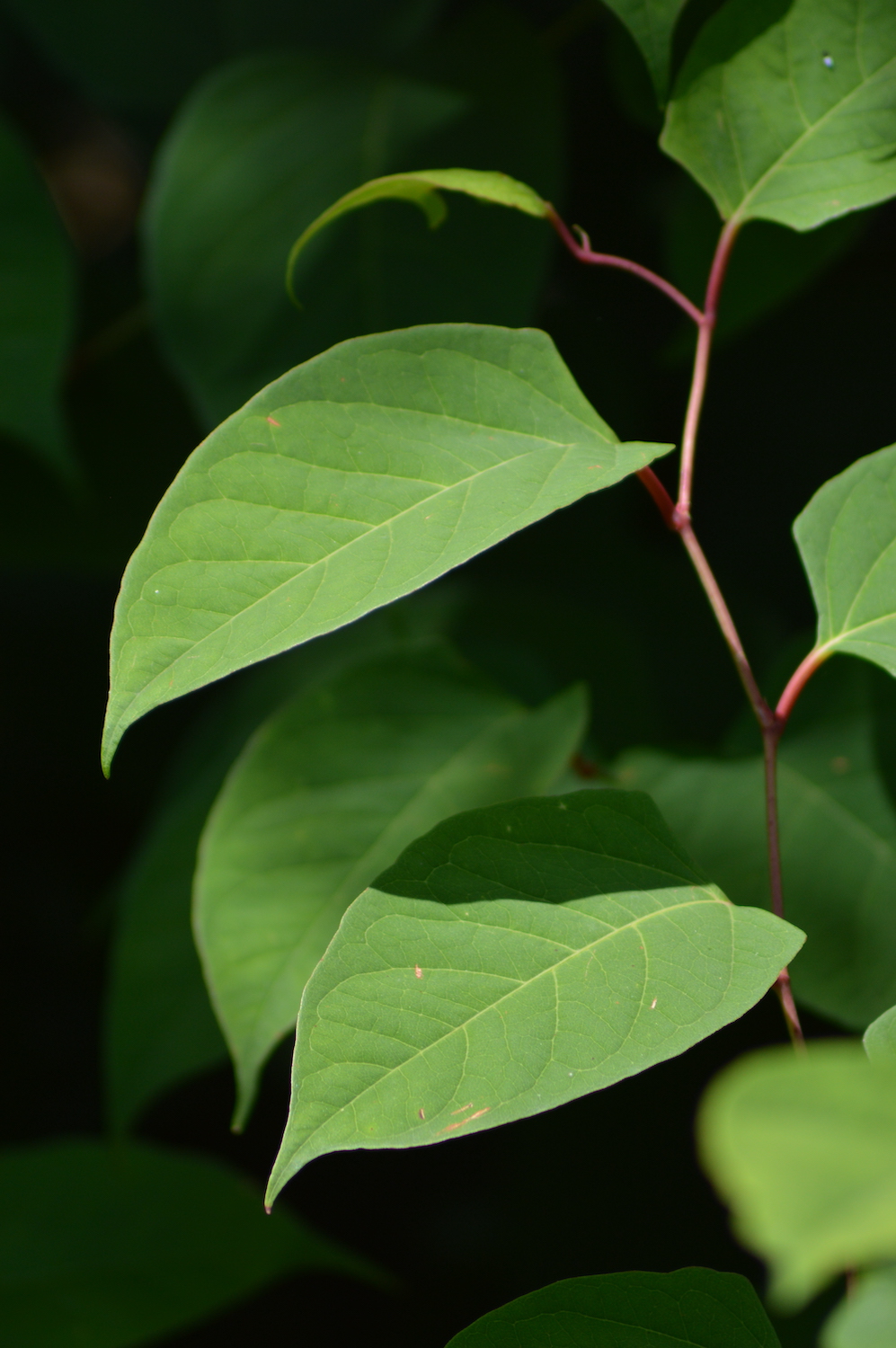 Initially introduced as a garden ornamental, Himalayan Balsam is a commonly found invasive species around Thunder Bay that shades out native understory vegetation.  Known for their “exploding” seed pods, Himalayan Balsam resembles other flowers in the genus Impatiens, commonly known as “touch-me-not’s”.  When the seed capsules mature and dry they will explode when touched, quickly spreading seeds and expanding existing populations.  It typically grows 1-3 metres tall, its stem is tinged with red and its leaves are a deep green, 5-20 centimetres long with a pointed tip and finely toothed edges.  The flowers are pink with a hooded shape and bottom lip.  Find it along riverbanks, along trails and in fields. 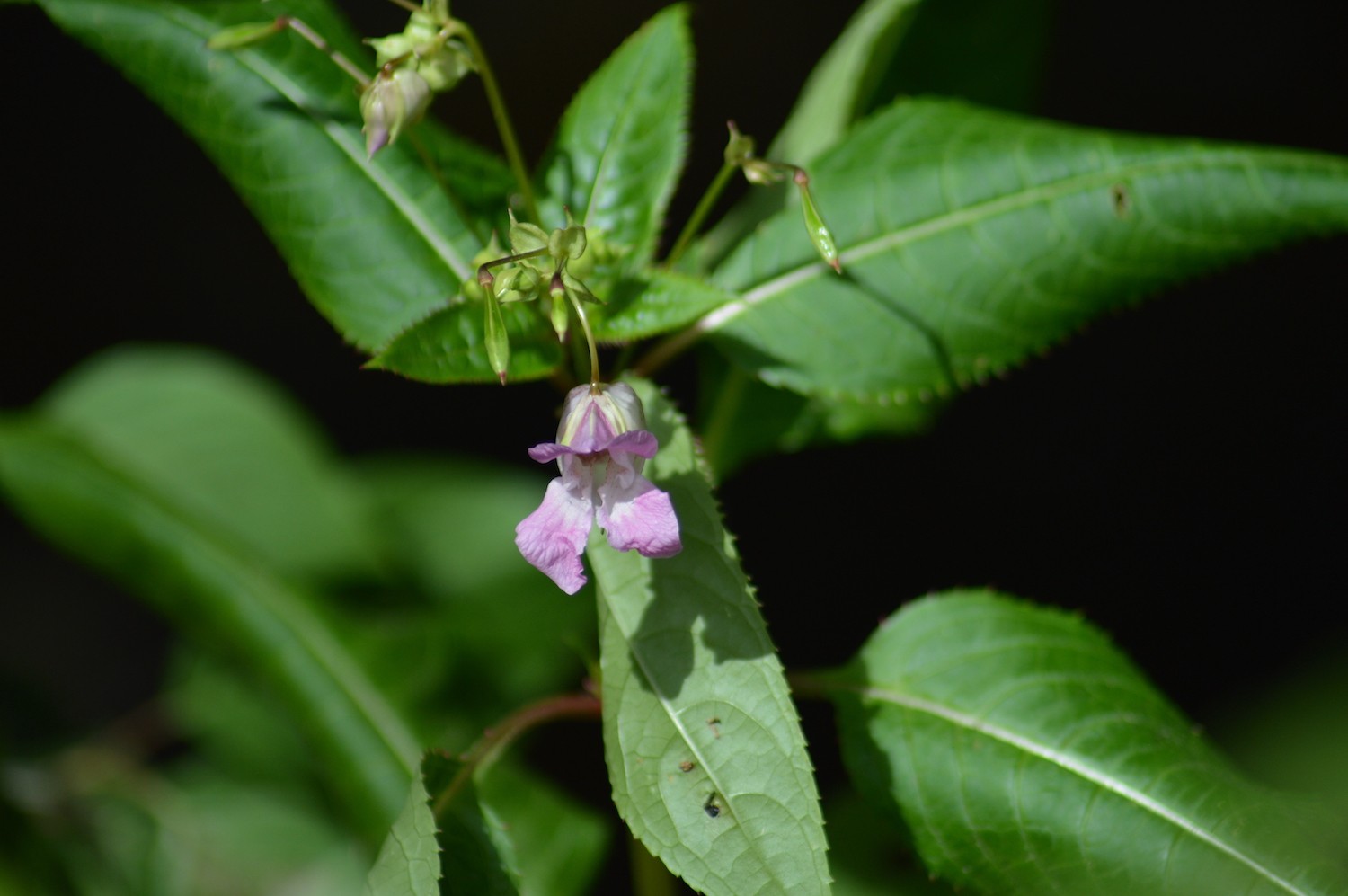 Growing to a height of 0.5 to 1.5 metres, Wild Parsnip has a light green and deeply grooved hollow stem.  Its leaves alternate along the main stem and are composed of 2-5 pairs of opposing leaflets, with one terminal diamond-shaped leaflet.  The leaflets have saw-toothed edges and long petioles (secondary stems connecting the leaves to the main stems).  Small, yellow, 5-petalled flowers grow in 15-25 rays/clusters per flower head.  Each flower head has the appearance of a flat umbrella.  After flowering, small 5-7 millimetres fruits replace each flower.  The fruit is a dry, oval shell containing two seeds, light green in colour with light pink at the top of each seed.  Fruit dispersal takes place between August and November and can stay viable in the soil for five years. 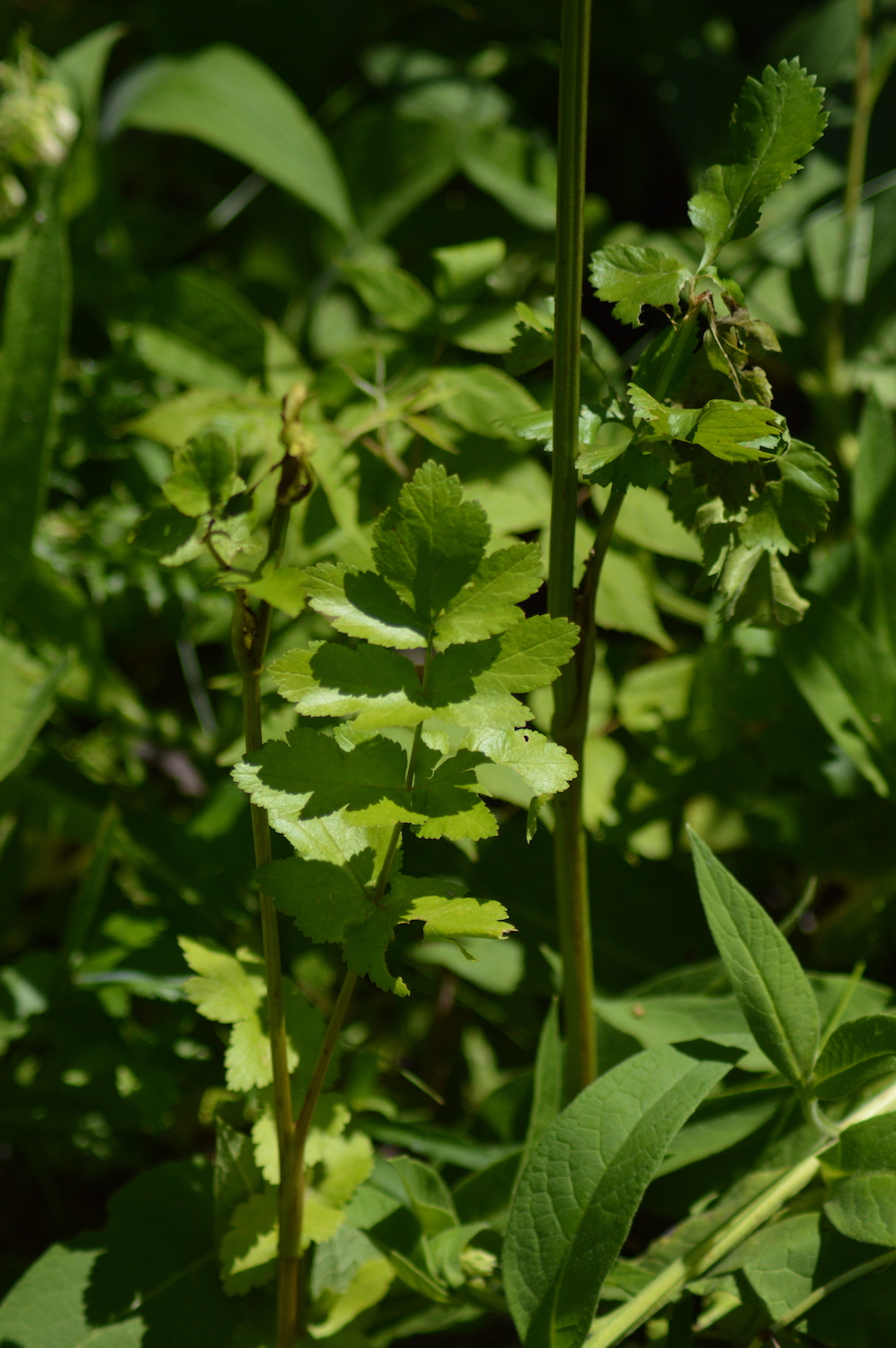 Giant Hogweed has not yet found its way to Northwestern Ontario; however, it’s important to be aware of this enormous plant as it has the potential for serious ecological and human health impacts.  It can grow up to 5 metres tall with its stem reaching a diameter of 10-15 centimetres.  Its stem is often covered in purple blotches, or completely purple in colour.  Its leaf edges are very jagged (think of a sprig of holly) and often grow up to 1 metre wide.  Flowers are white and clustered in umbrella-shaped heads which can measure up to 1 metre across.  Giant Hogweed sap can cause a condition called phytophotodermatitis, resulting in severe burns and blisters on skin exposed to both the sap and sunlight.  Another invasive species, Wild Parsnip, and a native species, Cow Parsnip, are all relatives of Giant Hogweed and require close attention to correctly identify – read more about Giant Hogweed look-alikes here.  (link LRCA Invasive Species Guide)

Invasive Phragmites grows in dense stands, sometimes with as many as 200 stems per square metre, crowding out other species.  It can reach up to 5 metres tall and has tan stems with blue-green leaves and large, dense seedheads.  Leaves are long and slender and difficult to remove from dead stems.  It is found frequently in roadside ditches.

Rapidly spreading across North American wetlands, shorelines and roadside ditches, Purple Loosestrife has already made its way to Thunder Bay.  Often composed of 1-15 flowering stems, the plant mass grows to 60-120 centimetres tall.  Stems are stiff, square (with 4 to 6 sides) and green in colour, turning to reddish brown or purple as they age.  Leaves are lance-shaped with smooth edges and fine hairs.  Flowers are deep pink to purple and arranged in a dense terminal spike of clustered flowers.  Each flower is composed of 5 to 7 petals, each around 10 millimetres long. 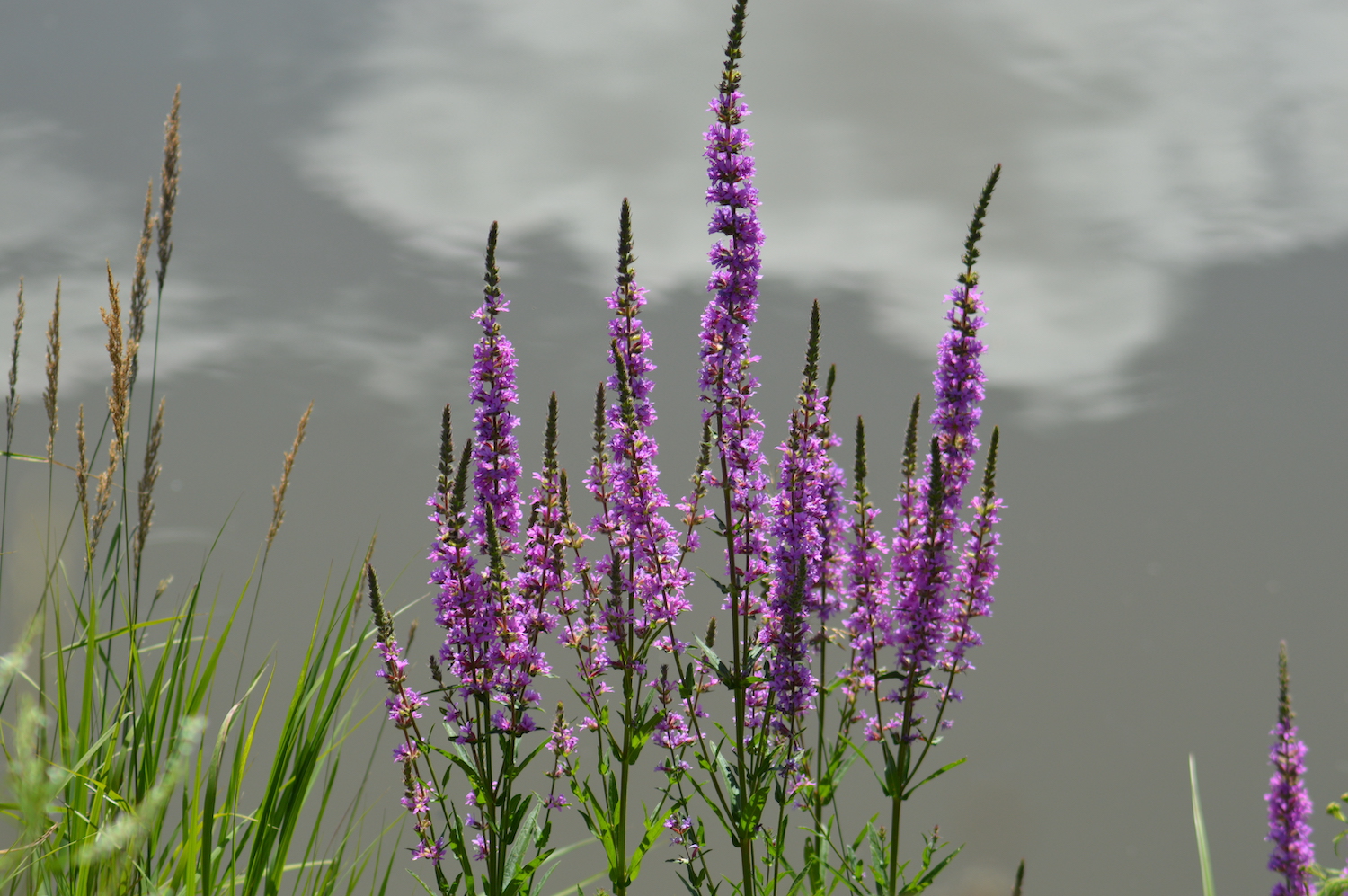 Frequently planted in backyard ponds and gardens, Yellow Iris forms dense stands and displaces native plants such as Northern Blue Flag Iris (Iris versicolor).  Flowers have three drooping, yellow sepals (they look like petals) with purple-brown markings that surround three smaller upright petals.  Leaves are flat, 2-3 centimetres wide and up to 1 metre long.  Yellow Iris is the only iris in North America with entirely yellow flowers, though when not flowering can easily be mistaken for the native Blue Flag Iris (Iris versicolor).  The native iris is smaller, with leaves 10-80 centimetres long and purple-blue flowers.

Identify Emerald Ash Borers on ash trees by their metallic blue-green backs, narrow in shape and hairless, growing between 8 to 14 millimetres long.  Larvae feed on the inner bark and sapwood of Fraxinus sp. trees.  Mature larvae are 26 to 23 millimetres long and creamy white and the abdomen is 10-segmented.

Adults are eel-shaped and 30 to 76 centimetres with no scales.  Skin is grey to dark brown with a lighter underside, and seven obvious gill openings.  Sharp teeth radiate around a tongue at the centre of a sucker mouth.  In partnership with Fisheries and Oceans Canada, LRCA maintains the Neebing Weir – a sea lamprey control structure – in an effort to prevent the invasive species from moving into inland lakes in the region.