A cooling trend on the Earth started almost 60 milion years ago. By about 2 millions years B.P. it was cold enough for glaciers to form in North America. The shorelines of modern Lake Superior started to develop almost 10,000 years (B.P.) before present, during the last glacial period called the "Wisconsian". The lakes which we now call Superior, Michigan and Huron were part of two vast inland lakes called "Lake Duluth" and "Lake Algonquin". These lakes were later joined as the glaciers retreated to form one vast lake. The level of this lake was controlled by a single outlet on the south shore of Lake Huron. 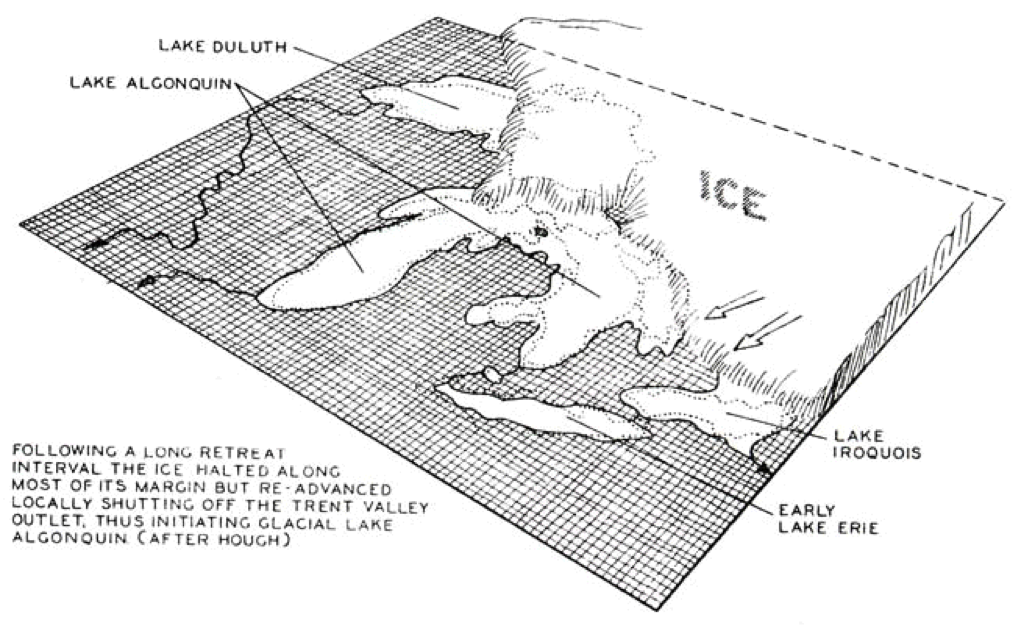 10,500 Years Ago, Lake Duluth with Glaciers which pushed down the Earth's Crust in the North 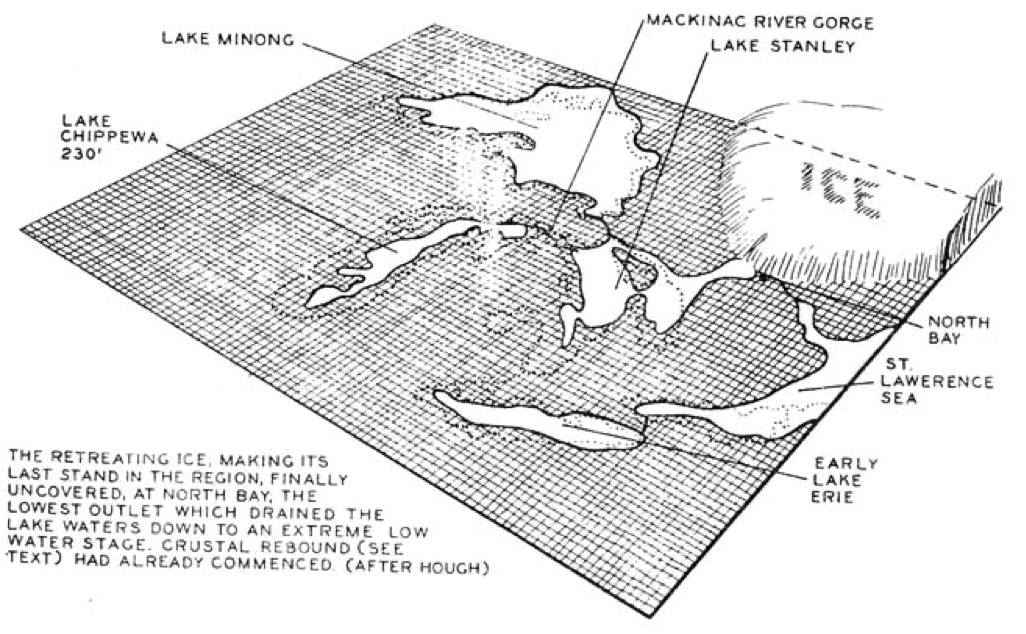 9,500 Years Ago, The glaciers towered several kilometres above the ground, and the massive weight of the ice pushed the earth's crust down. The north side of the Great Lakes was pushed down further than in the area south of the lakes where the ice was thinner.

At about 9,500 years B.P. the sinking of the crust to the north of Lake Superior caused the lower great lakes to drain away to the north, as if a plug being pulled in the bath. The water flowed out of the lake at this time through North Bay, Ontario. The waters continued on down the Ottawa Valley to the St Lawrence Sea (Figure 7). Diagrams are from "The Nipissing Great Lakes".

Once the glaciers retreated, the Earth's crust started to rebound (rise). The result is that the north side of Lake Superior keeps rising by about one foot (30-50cm) per century compared to lands along the southern edge of the Great Lakes. This process is called "isostatic rebound" by geoscientists. The result is that the Great Lakes are tilting to the south, with more land exposed on the north shore of Lake Superior each century. Ancient beaches and shorelines have been submerged on the south shore of Superior, since the lake is tilting southwards. This tilting can be carefully measured using carbon dating. For example Duluth Harbour has undergone 5.8 metres of submergence (20ft) over the past 2000 years; divers in the harbour have discovered submerged ancient tree stumps which help in determining the location and elevations of these ancient shorelines (C. Larsen-U.S.G.S.). The many raised beaches on both the north and south side of the lake give further evidence both of glacial rebound and of the different water levels which existed in the Great Lakes basin as the glaciers retreated. 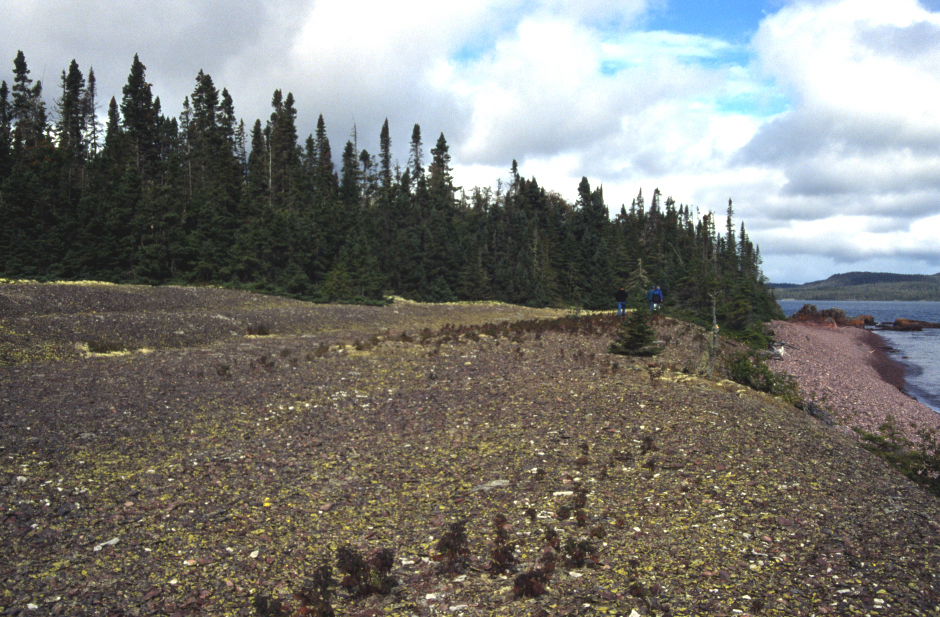 About 2100 years ago this tilting raised the level of the St Mary's Rapids, creating a separation of Lake Superior from Lakes Michigan and Huron. From this time on the levels and shorelines of Lake Superior have been controlled by the elevation at the St Mary's rapids near Sault Ste Marie. As this isostatic rebound continues to happen there will be more "raised beaches" formed on the north side of Lake Superior and more submerged beaches lost below the waves on the south shore. 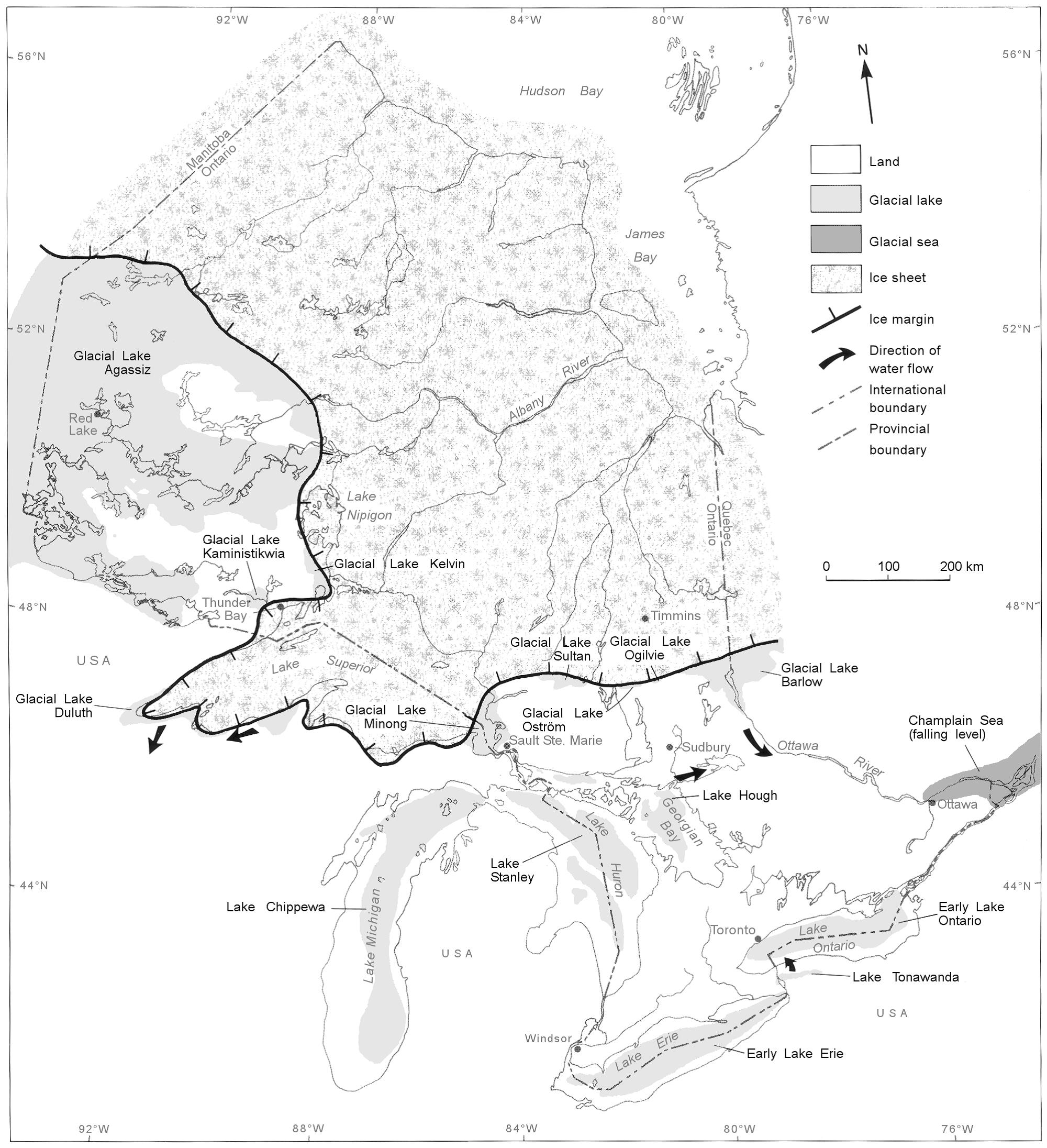 Glacial Moraines are large areas of sand, gravel and boulders left behind by the glaciers. A moraine represents the soils and rocks of Northern Ontario which were pushed ahead of the glaciers. They were left behind as raised glacial topography as the glaciers retreated. 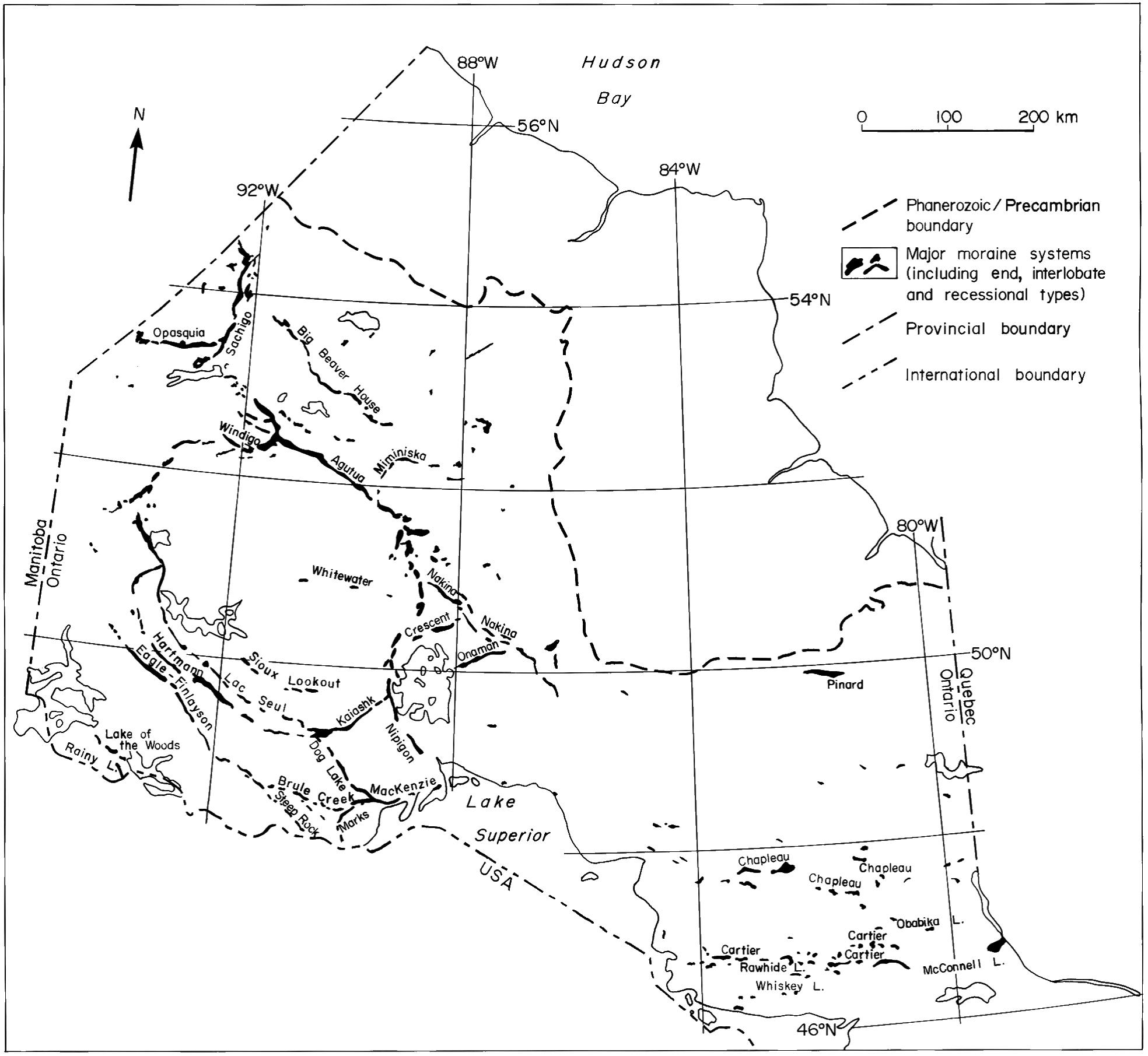 From Moraines of northwestern Ontario (modified from Sado and Carswell 1987). Geology of Ontario; OGS Special Volume 4

© Queen's Printer of Ontario, 2015, and ©Her Majesty the Queen in Right of Canada, 2015, Reproduced with permission.

We know that the climate is changing rapidly today due to human caused pollution and land development. We can also look back in history to see how different Lake Superior has been over the last thousands of years during natural climate variations.

The passage below shows how trees can tell us how different the climate and lake levels were after the glaciers retreated:

"When Captain Peter Lindquist discovered a prehistoric forest almost 200 feet under Lake Superior, he was amazed. Capt. Lindquist became excited when his depth finder showed what appeared to be masts standing up off the bottom in 180 feet of water. Gearing up with double tanks, he and his partner started down on their very deep dive with high expectations of dropping onto a shipwreck standing intact on the bottom. Instead of masts, however, they found themselves among several tall trees standing upright on the lake bottom! "Upright on the lake floor, the trees were one to two feet in diameter and perhaps 15 to 20 feet high, with branches intact. Sitting on the bottom, it was like looking up through maples"."

Other trees rooted into the lake bottom have been found by divers searching for shipwrecks, carbon dating of these trees puts their age at about 8000 years B.P.. Glacial climates commonly feature very low lake and sea levels since much of the water has fallen as snow and is trapped in the glaciers. The natural water cycle is disrupted during these periods since there is very little water run off back to the lakes and seas.

Paleo (ancient) lake levels have varied in the last 1500 years; low water elevations of 180.5 metres occured during a medieval warming period around the 13th century A.D.. This low water level seems to have corresponded to a surge in sun spot activity and a warming period in Europe. This era of low water and high temperatures was followed by a period of time called "The Little Ice Age" (1614 to 1741) when water levels rose to 183.8 metres, almost 1 metre higher than the current lake level. At this time temperatures recorded in Europe were very low and there were many crop failures and summer frosts. The variation in lake level of 3 metres (10 ft) between historic warm and cold climate periods will help us to predict what may happen as the planet warms today. See Climate Change for additional information.