A Story Told in Ancient Rocks

Some of the oldest rocks in the world can be found near the shores of Lake Superior. For hundreds of millions of years volcanism and continent building occurred, and the solid crust of North America was formed. The ancient Archean Era rocks around the Thunder Bay area have been age dated as 2.7 billion years old, using radioactive elements. The rock consists of granite, gneiss and greenstone volcanic rocks. These rocks were formed as magma or molten rock cooled within the earth (intrusive rocks with crystals- i.e. granites), or volcanic rocks which flowed as lavas (fine grained-extrusive rocks-ie basalts). These two rock types are classified igneous rocks, this means that they have cooled from magmas either deep inside the Earth such as photo 1, granite, or erupted from volcanoes such the basalt shown in Photo 2.

Some of the ancient rocks have been changed into metamorphic rocks through heat and pressure which causes re-crystallization. Sedimentary rocks formed as the higher elevation areas eroded (Photo 3 - Animikie Shale). Lake Superior now occupies a small part of the original North American Continent or "craton". All of these rocks mentioned above existed long before any advanced life forms were found on Earth (during the Precambrian Era). The basin filled by Lake Superior has been occupied by ancient seas and oceans many times during the past, long before the lake which we know as Superior came to be.

Animikie Shale, GeoTour Images © Queen's Printer of Ontario, 2015, and ©Her Majesty the Queen in Right of Canada, 2015, Reproduced with permission.

The core of what we now know as the North America continent or "craton" is depicted in Figure 1 - Wikipedia.

How the Continent Formed

The early continent was forming in an oceanic environment where tectonic plates collided. When plates collide one plate is forced beneath the other and the rocks that are driven deep below the crust by subduction melt and form volcanoes. This type of environment is seen today in active volcanic belts such as Indonesia and the Philippines. The area where plates collide is called a convergent boundary and is illustrated very well in this Ocean Subduction animation.

The Key to the Earliest Life on Earth

Much of the newly formed North American continent was covered by the ocean. During this early period of Earth's history the atmosphere began to change. At first there was no oxygen but other gases such as carbon dioxide were abundant. Blue-Green algae (cyano-bacteria) evolved as an early form of life in our oceans approximately 3 billion years ago. This bacteria was able to produce oxygen through photosynthesis. If you have ever walked across slimy stones in a river or stream, you have seen modern equivalents of this bacterial slime. The sea was filled with dissolved minerals including iron and silica, which came from the volcanic vents. The dissolved iron reacted with oxygen produced by the cyano-bacteria to form hard brittle rocks named iron formations. The iron formations extended for hundreds of kilometres along the sea floor (Photo 4).

If you have seen the dark red rocks of Northern Minnesota or north of Thunder Bay, these rocks are the geological proof of how and when oxygen was released on the Earth (Photo).

Mounds of blue-green algae surrounded the iron formations, and they can be seen as fossilized remains as 1.6 billion year old creatures called Oncoliths and Stromatolites (Photo 5).

These ancient life forms are layered within iron and chert (silica) rich rocks called " iron formations". These iron and chert layers stretch from Thunder Bay, Ontario to the Mesabi Iron Range in Minnesota and form the "Gunflint Formation". Fine sediments also filtered down to the sea floor in the basin, they were pressed down in thick deposits forming sedimentary rocks, such as shale. The finely layered shales and mudstones became layered with the iron formation rocks. These rocks form what geoscientists call the "Animikie Group". The iron formations and chert beds were extremely hard rocks which were prized by early First Nations settlers in the region for creating arrow heads and spear points. 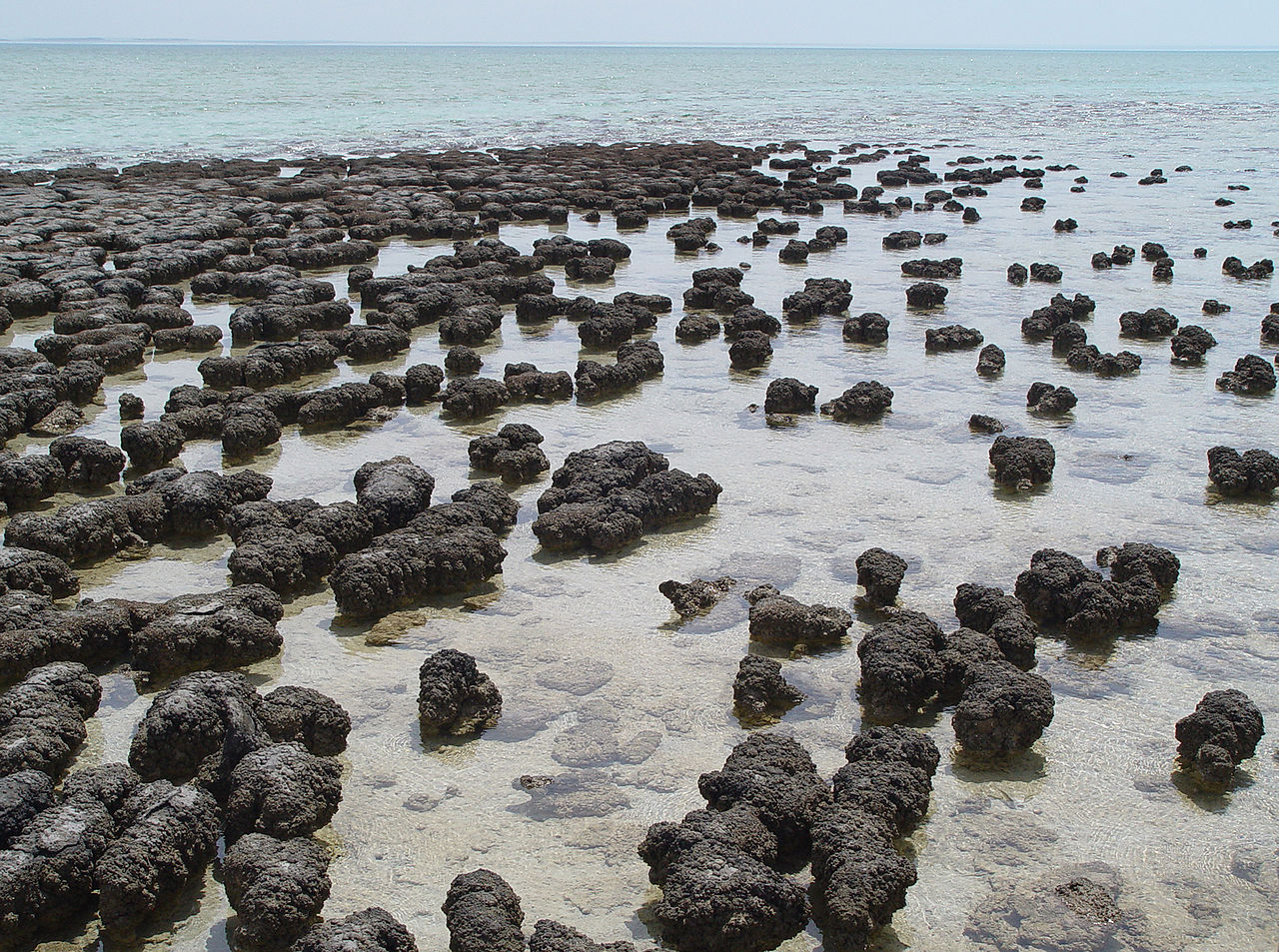