The Great Lakes Tectonic Zone formed about 1.1 billion years ago creating a great rift system extending for thousands of kilometres. The lavas which flowed out from the Keewanaw and Black Bay Peninsulas. The lavas are believed to be 35 kilometres thick underneath Lake Superior. The pile of lava was so heavy that the Lake Superior Basin sank into the crust as tectonic forces tried to pull the area north of Lake Superior from the area to the south of the rift.

The lava which flowed from ancient volcanoes, was fed from long fractures and zones of weakness extending deep into the Earth. The molten "magma" rose up along vertical dykes, but it also spread also out along weak zones between layers of sedimentary rock, never making it to surface. The intrusive rocks spread out in flat or gently dipping layers called "sills" between beds of sediments. The magma that formed the Keewanawan basalt lavas is of a similar age (1.1-1.4 billion years) to the magma which cooled inside the Earth to form the Nor'Wester Mountains. Therefore it is believed the magma that cooled inside the Earth was feeding these volcanoes.

Near Thunder Bay and Nipigon these flat layers of diabase form the Nor-Wester Mountains. The dark igneous rock called "diabase" is extremely hard, and has survived weathering and erosion to form flat topped mesas. Where these rocks dip down into the Lake Superior Basin they form cuestas. Cuestas form some of the islands which outcrop in Lake Superior. The rocks flowing from the Mid Continental Rift were intruded almost a billion years after the Sudbury meteorite impact, and they form the" youngest" rocks (1 billion years B.P.) found along the north shore of Lake Superior. The igneous diabase rock forms a cap, protecting the softer sedimentary rocks of the Animikie Group. Erosion of the sedimentary rock has created the mountains. The sills can be found at different levels cutting into the older rock formations (Figure 10). In areas where no diabase rocks intruded, the soft sediments eroded down forming valleys, such as the flat land seen today along the the Kaministiquia and Slate Rivers.

The Nor'Wester Mountains near Thunder Bay, ON, Mt MacKay-Diabase Sill (caprock), above the Kamimistiquia River Valley.

Kakabeka Falls formed as a river valley sculpted by water erosion. The soft sedimentary rocks were easily eroded by the power of glacial periods which have been repeated every hundred thousand years or less. Water running from glacial melts carved canyons. The erosion continues today in places such as Kakabeka Falls along the Kaministiquia River. Here a caprock of hard volcanic rock protecting the softer sedimentary rocks below. Rocks at the bottom of the Falls are shale layers in the Gunflint Formation. Iron formation overlaying the volcanic cap rock can be seen in the provincial park's parking area. The position of the Falls would have been nearly 1 kilometre closer to Lake Superior at the end of the last glacial age. 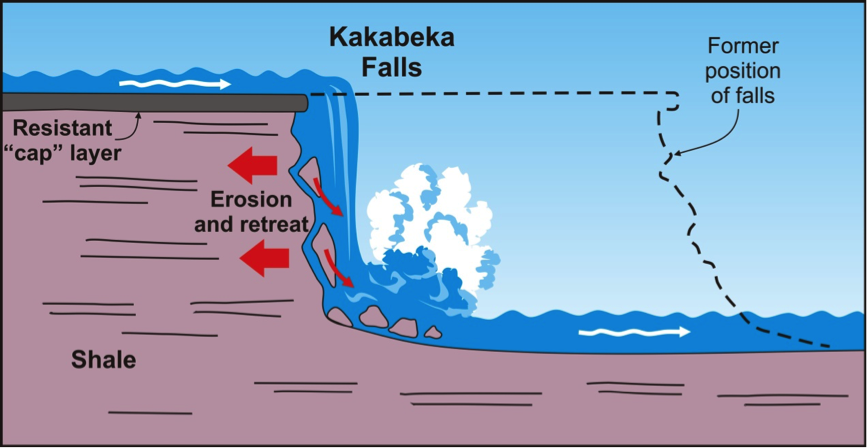 How the Kakabeka Falls Formed, The valleys formed as rivers carve through soft sedimentary rocks. Cap rocks such as the igneous rocks at Kakabeka formed waterfalls. All images courtesy MNDM GeoTour.